From US $84 Tour Enquiry
Buddha Park and Vientiane City Tour Full Day tour to stroll through Xieng Khuan - Buddha Park, a whimsical garden of 200 sculptures ranging from an enormous reclining Buddha to a demon’s mouth, and visit major of capital Vientiane, studded with crumbling French mansions, bougainvillea­-blooming streets and steaming noodle stalls, is somewhere between a big town and a diminutive city.

8h00 : Our tour guide and driver will pick you up at your hotel, we first visit to Wat Si Muang, which is very famous for its supernatural power. After that We drive to the Buddha Park (also known as Xieng Khuan), an enchanting collection of Buddhist and Hindu sculptures on the Mekong Riverside meadow, close to the Friendship Bridge. There are approximately 200 religious images dating back over 500 years, which were created by a mysterious monk spreading his philosophy on life and revealing his ideas about the universe.
12h00 : Lunch at a local restaurant
13h30 : We continue the tour to see the major sights of the capital Vientiane; including the oldest Wat Sisaket, the temple with thousands of miniature Buddha statues and the former royal temple of Wat Prakeo, which previously housed the famous Emerald Buddha Image. On the way to Lao’s national icon, the famous and sacred structure of That Luang Stupa, we stop enroute to take some pictures of the imposing Patuxay Monument, which is well known as Vientiane’s own Arc de Triumph.
Enjoy a spectacular view over the Mekong River at sunset is a perfect way to finish the day.
17h30 : Back to your hotel, end of the tour 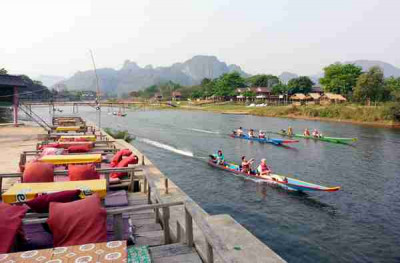 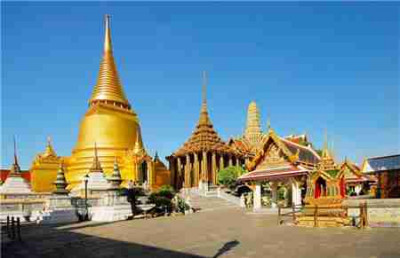