West Lake, also called Ho Tay, is the biggest lake in central Hanoi, covering 500ha. In the past, West Lake used to be part of the Red River. West Lake, a beautiful spot in Hanoi, was once a resort for mandarins and kings.
The lake is on the northwest part of the city. Long ago, the lake was a branch of the Red river but later, as the river changed course, the lake remained a body of water just west of the river. There are many legends associated with West Lake. The most popular is the legend of the golden buffalo. A small part of West Lake is divided by Thanh Nien road to form Trúc Bạch Lake. One district of Hanoi is named after the lake, Tay Ho District.
Location    : Tay Ho district, Hanoi
Area          : 5.3 km²
Lake type  : Lake
Shore length  : 17 km

History
As the story goes, there once was a medicine man who was a giant. He is well known in Vietnam for his medicine practice and the king often used him to treat the royal family. His fame reached China and he was invited to China to treat the king. He was successful where others have failed so the king was going to reward him with great wealth. He refused offerings of gold and only requested that the king give him all the black copper in the king's vault. The king agreed and the giant left for Vietnam with vast amounts of black copper. In Vietnam the giant molded a giant bell of black copper. The giant rang the bell and the sound resonated all the way to China. In the king's vault there was a golden buffalo. Upon hearing the sound of the bell, the buffalo came to life (because he thought that his mother was calling him) and charged southward. Upon reaching Ha Noi, the buffalo trampled the land in the area near Red river. Over the years, this area filled with water and became Ho Tay or West Lake.
Ho Tay has always been an area for vacationing royalties. When Ha Noi was still the capital city, the kings from the Ly and Tran dynasty built summer homes along the lake. In the north end of the lake there are several villages famous for their flowers and fruits plantations. Most famous is Nghi Tam village, the birth place of Ba Huyen Thanh Quan, one of Vietnam's premier Poetess.

What to See
Today, many of the summer homes built by kings of yesteryears are now shrines and temples.Many palaces including Thuy Hoa Palace, Ham Nguyen Sanctuary, Tu Hoa Palace, Kim Lien Pagoda, and Ngoc Dam Palace were built on the bank of the lake.
The 17km path around the lake leads to Nghi Tam flower village, Tay Ho, Nhat Tan peach garden and Tay Ho Temple, were built in honour of Princess Lieu.
Phu Tay Ho is one of the more popular shrine on the shore of Ho Tay. During the first and fifteenth day of the lunar month, people from all over Ha Noi pour to the shrine to pay respect to the deities. On these days, the roads are filled with people dressed in colorful attire heading to the narrow road leading to the shrine.Visitors can go sightseeing and enjoy typical dishes, Phu Tay Ho is also famous for the Bun Oc (escargot vermicelli soup) and Banh Tom (shrimp cakes) sold in stalls along the way.
West Lake, also called Ho Tay, is the biggest lake in central Hanoi, covering 500ha. In the past, West Lake used to be part of the Red River. West Lake, a beautiful spot in Hanoi, was once a resort for mandarins and kings.

1. Quan Thanh Temple
Quan Thanh Temple is situated in Quan Thanh Ward, Ba Dinh District, Hanoi.
Quan Thanh Temple is one of the Four Guards of Old Thang Long. Quan Thanh Temple is an important historical and cultural relic, on a large and beautiful area by West Lake near the northern gate of old Thang Long Capital.
It was built during the reign of King Ly Thai To (1010-1028). The temple was dedicated to Huyen Thien Tran Vo or the God who guarded and administered the north of the country. That is why it is also known as the Tran Vo Temple or the Temple of Quan Thanh Tran Vo.
The existing constructions originate from the last renovations that were made in the 19th century; these renovations included the triple gate, the yard, the front and central worshipping chambers, and the shrine. A bronze statue, nearly 4m in height and 4 tons in weight, was cast in 1677 and dedicated to the Saint Huyen Thien Tran Vo.
Location     : Thanh Nien street, Quan Thanh Ward, Ba Dinh district, Hanoi
Opening Hours   : 8:00 – 17:00 every day

2.  Tran Quoc Pagoda
This is the oldest Pagoda in the capital of Vietnam. Tran Quoc Pagoda, which is now located on an islet within West Lake, was built in the 6th century during the reign of King Ly Nam De and is respectfully considered as a cultural symbol of Vietnamese Buddhism. If you have been there for the first time, you will be highly likely to be surprised by a number of intricate statues carved in 1939, each of which has a unique facial feature.
Tran Quoc pagoda ’s opening hours are from 8 a.m to 4 p.m, thanks to which, tourists would have enough time to completely enjoy the specific architecture and stunning sunset view the Pagoda has long been famous for.
The solemn beauty of this pagoda has been recognized on the global scale as it was voted by The Daily Mail (UK) as one of the 16 most beautiful pagodas in the world.
Location : Thanh Nien street, Yen Phu ward, Tay Ho district, Hanoi
Opening Hours : 8:00 – 16:00 every day

3. West Lake’s Water Park
Taking up a corner of West Lake, this busy and interesting water park takes its inspiration from the gorgeous city of Santorini in Greece. It is popular among families with kids who want to have an amazing time playing a variety of adventurous water sports in the hot summer.
The amusement park at the same location has fifteen different attractions and a games zone (Sun and Moon Park). You can also find a rollercoaster, pirate ship, UFO, Crazy Wave and a 60 metre high Ferris wheel. For the younger children there are driving carts, a bubble house, and bumping cars.
The entrance fee to the park is VND 100,000 (US$ 4.5) for those below 130 centimetres and VND 150,000 (US$ 6) for those above 130 centimetres. The water park is open from April until November and is closed on Tuesdays. This is a popular destination for Hanoians as well as tourists, so if you have the chance you should visit during the week as in the weekend it can get crowded in here.

What to eat
Shrimp Cakes :
Banh tom ( Shrimp cakes)  beginnings
Banh tom, or shrimp cakes, are thought to have become common in the 1930s when small street vendors began congregating along Thanh Nien Street — a road that separates West Lake (Tây Hồ) and Trúc Bạch Lake. When the hawkers garnered popularity, the government later combined many of the stalls and opened one big restaurant along the waterfront. Enter Banh Tom Ho Tay. Since then, the restaurant has been a fixture on Thanh Nien Street. “(Shrimp cakes are) related to war and, of course, poverty in Vietnam,” Quỳnh Anh Nguyen, a photographer living in Hanoi, tells CNN Travel. “Back then, people didn’t have much (in terms of) luxurious food or quality meat or anything. I still remember that we were just looking forward to (eating at) the restaurant on the weekend with my parents. It was like a treat. “Today, the restaurant still draws a steady stream of friends and families, gathering for slow afternoons full of crispy, savory shrimp cakes, chilled bia hoi (local draft beer), and front-row seats to the lake.

So what is it?
Deceptively time-intensive, Hanoi-style shrimp cakes have just a few main ingredients: freshwater crayfish or shrimp from West Lake, flour and sweet potato. Instead of grinding the shrimp into a paste (like a fish ball), the fried seafood is usually left whole — sitting atop the crunchy cakes. It’s typically served with lettuce leaves for wrapping, plus chili, lime juice and fish sauce for dipping. “For the locals, it is more about the memories of the old time and nostalgia. It’s actually quite manual work (to catch the shrimp at the lake),” says Nguyen. “People have to go with a torch at night-time just to manually catch every single shrimp.” 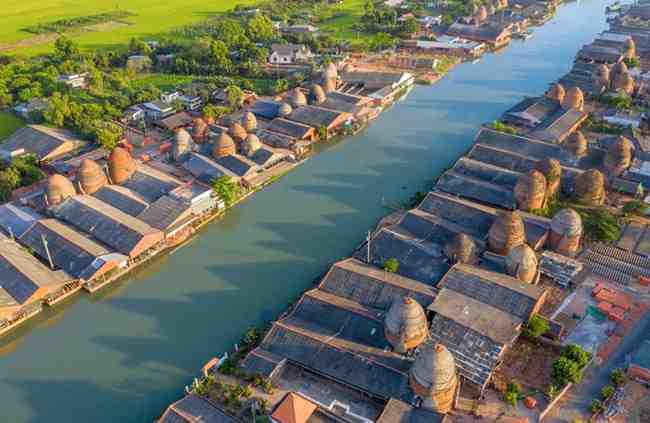