Where to eat at night in Dalat

Da Lat eateries usually remain open until midnight. They have good reason. Tourists often bundle themselves up in warm clothing and wander the streets in spite of the chilly mountain air. Their hunger pangs may lead them to a place with an off - putting name - Cho Am Phu(Hell's Market). But the food there is palatable. The market is located next to Hai Son Hotel, near Da Lat's central market.
A few years ago, on the steps leading to Da Lat Market of Hoa Binh Quarter, there were several vendors serving cheap food at night. Their businesses flourished so well that they blocked the streets and ruined the view. That's why the local authorities decided to move the market to its current location, 200 meters from the previous one.

At Hell's Market, restaurants and food stalls serve dishes from the northern, central and southern areas of Viet Nam, and even from China. These include noodles, rice porridge, soy beverages, roasted squid, and corn on the cob.

Make sure you check the prices of the dishes before you order. Some sellers may try to take advantage of your innocence to grab an easy buck.

In addition to Hell's Market, you can try these other eateries:

There are the bún bò Hue (Hue beef noodles) restaurants in the alley called Anh Sang (light) by Xuan Huong Lake. The cooks are natives of Hue City in central Viet Nam, so you can taste real Hue dishes. On a cold night, the hot peppery foods will certainly cut the chill. Some food shops also serve dishes, such as Quang noodles and duck rice soup.

If you miss Pho (rice noodle soup), try the phá»Ÿ restaurants on Tang Bat Ho Street before midnight. Only two big Pho restaurants on this street remain open until 2 a.m. in the morning. 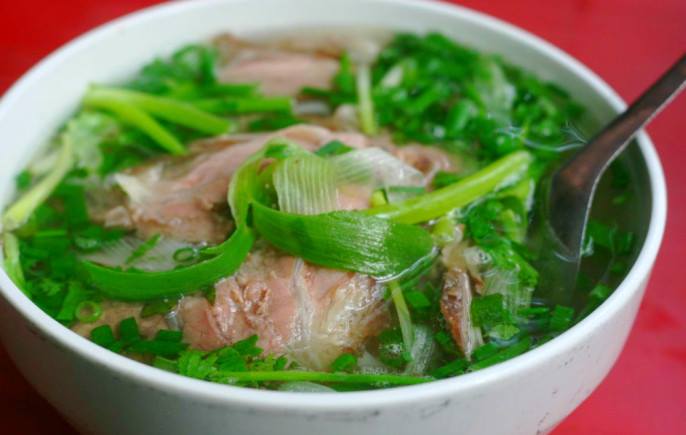 A map of Pho in Saigon